Why should I hire a reading tutor for my child

Below is a quick excerpt from Scientific American about Navigating Textual Landscapes. I found the research very thought-provoking, certainly worth checking it out! Additionally, I saw how we can relate these findings to the SAT® and ACT reading sections.

As we read the passage with my students, we “murder it” with annotations. making it easier to find answer questions on a reading comprehension sections. Personally, I have a harder time locating a detail from the text I read on the screen even if I was using an electronic highlighter.

Below is an example of a lightly annotated ACT passage. 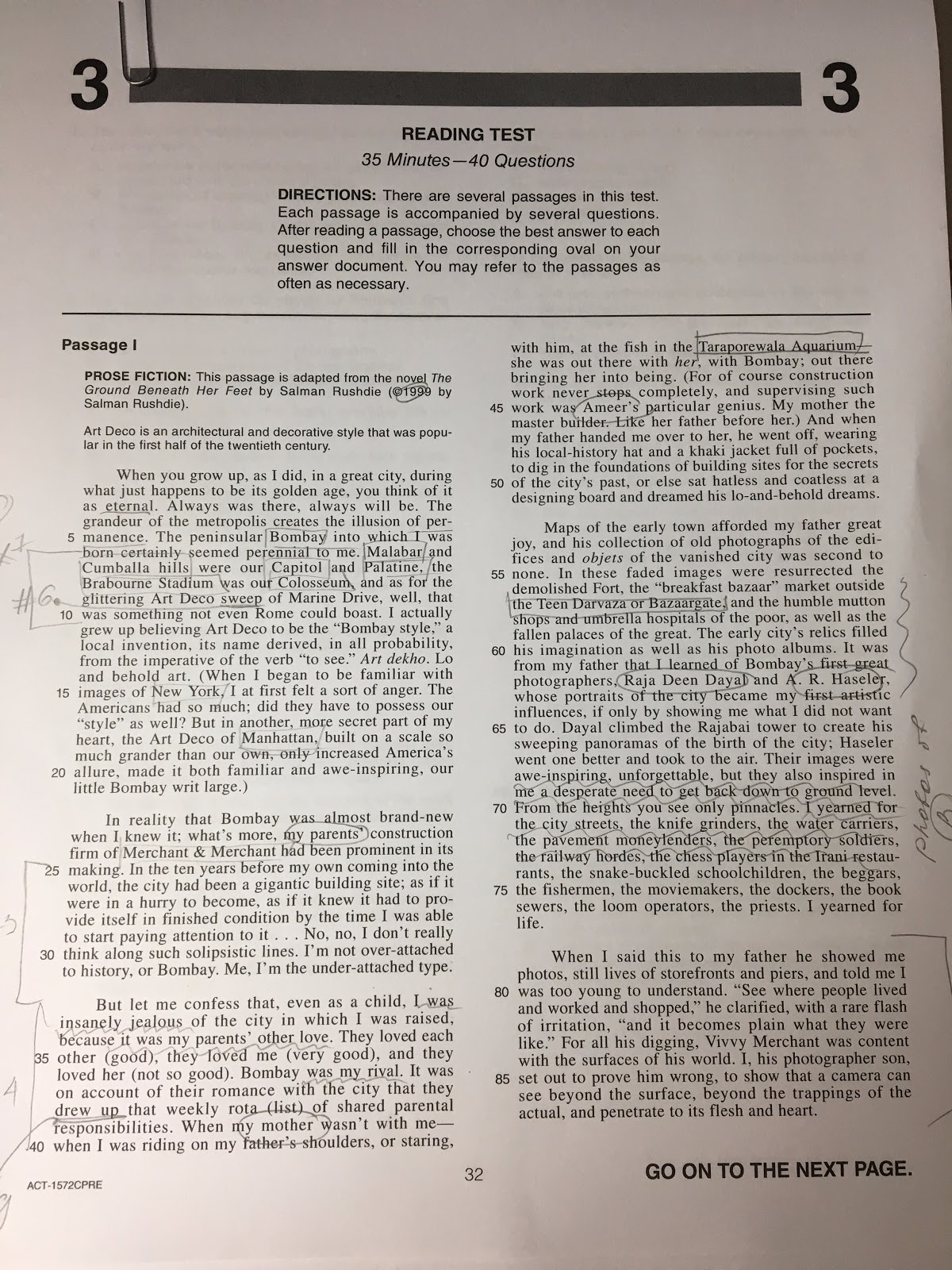 Understanding how reading on paper is different from reading on screens requires some explanation of how the brain interprets written language. We often think of reading as a cerebral activity concerned with the abstract—with thoughts and ideas, tone and themes, metaphors and motifs. As far as our brains are concerned, however, text is a tangible part of the physical world we inhabit. In fact, the brain essentially regards letters as physical objects because it does not really have another way of understanding them. As Wolf explains in her book Proust and the Squid, we are not born with brain circuits dedicated to reading. After all, we did not invent writing until relatively recently in our evolutionary history, around the fourth millennium B.C. So the human brain improvises a brand-new circuit for reading by weaving together various regions of neural tissue devoted to other abilities, such as spoken language, motor coordination and vision.

Some of these repurposed brain regions are specialized for object recognition—they are networks of neurons that help us instantly distinguish an apple from an orange, for example, yet classify both as fruit. Just as we learn that certain features—roundness, a twiggy stem, smooth skin—characterize an apple, we learn to recognize each letter by its particular arrangement of lines, curves and hollow spaces. Some of the earliest forms of writing, such as Sumerian cuneiform, began as characters shaped like the objects they represented—a person's head, an ear of barley, a fish. Some researchers see traces of these origins in modern alphabets: C as crescent moon, S as snake. Especially intricate characters—such as Chinese hanzi and Japanese kanji—activate motor regions in the brain involved in forming those characters on paper: The brain literally goes through the motions of writing when reading, even if the hands are empty. Researchers recently discovered that the same thing happens in a milder way when some people read cursive.

Beyond treating individual letters as physical objects, the human brain may also perceive a text in its entirety as a kind of physical landscape. When we read, we construct a mental representation of the text in which meaning is anchored to structure. The exact nature of such representations remains unclear, but they are likely similar to the mental maps we create of terrain—such as mountains and trails—and of man-made physical spaces, such as apartments and offices. Both anecdotally and in published studies, people report that when trying to locate a particular piece of written information they often remember where in the text it appeared. We might recall that we passed the red farmhouse near the start of the trail before we started climbing uphill through the forest; in a similar way, we remember that we read about Mr. Darcy rebuffing Elizabeth Bennett on the bottom of the left-hand page in one of the earlier chapters.

In most cases, paper books have more obvious topography than onscreen text. An open paperback presents a reader with two clearly defined domains—the left and right pages—and a total of eight corners with which to orient oneself. A reader can focus on a single page of a paper book without losing sight of the whole text: one can see where the book begins and ends and where one page is in relation to those borders. One can even feel the thickness of the pages read in one hand and pages to be read in the other. Turning the pages of a paper book is like leaving one footprint after another on the trail—there's a rhythm to it and a visible record of how far one has traveled. All these features not only make text in a paper book easily navigable, they also make it easier to form a coherent mental map of the text. In contrast, most screens, e-readers, smartphones and tablets interfere with intuitive navigation of a text and inhibit people from mapping the journey in their minds. A reader of digital text might scroll through a seamless stream of words, tap forward one page at a time or use the search function to immediately locate a particular phrase—but it is difficult to see any one passage in the context of the entire text. As an analogy, imagine if Google Maps allowed people to navigate street by individual street, as well as to teleport to any specific address, but prevented them from zooming out to see a neighborhood, state or country. Although e-readers like the Kindle and tablets like the iPad re-create pagination—sometimes complete with page numbers, headers and illustrations—the screen only displays a single virtual page: it is there and then it is gone. Instead of hiking the trail yourself, the trees, rocks and moss move past you in flashes with no trace of what came before and no way to see what lies ahead.

"The implicit feel of where you are in a physical book turns out to be more important than we realized," says Abigail Sellen of Microsoft Research Cambridge in England and co-author of The Myth of the Paperless Office. "Only when you get an e-book do you start to miss it. I don't think e-book manufacturers have thought enough about how you might visualize where you are in a book."

At least a few studies suggest that by limiting the way people navigate texts, screens impair comprehension. In a study published in January 2013 Anne Mangen of the University of Stavanger in Norway and her colleagues asked 72 10th-grade students of similar reading ability to study one narrative and one expository text, each about 1,500 words in length. Half the students read the texts on paper and half read them in pdf files on computers with 15-inch liquid-crystal display (LCD) monitors. Afterward, students completed reading-comprehension tests consisting of multiple-choice and short-answer questions, during which they had access to the texts. Students who read the texts on computers performed a little worse than students who read on paper.

Based on observations during the study, Mangen thinks that students reading pdf files had a more difficult time finding particular information when referencing the texts. Volunteers on computers could only scroll or click through the pdfs one section at a time, whereas students reading on paper could hold the text in its entirety in their hands and quickly switch between different pages. Because of their easy navigability, paper books and documents may be better suited to absorption in a text. "The ease with which you can find out the beginning, end and everything inbetween and the constant connection to your path, your progress in the text, might be some way of making it less taxing cognitively, so you have more free capacity for comprehension," Mangen says.

Supporting this research, surveys indicate that screens and e-readers interfere with two other important aspects of navigating texts: serendipity and a sense of control. People report that they enjoy flipping to a previous section of a paper book when a sentence surfaces a memory of something they read earlier, for example, or quickly scanning ahead on a whim. People also like to have as much control over a text as possible—to highlight with chemical ink, easily write notes to themselves in the margins as well as deform the paper however they choose.